Race Against The Sun: Part Two 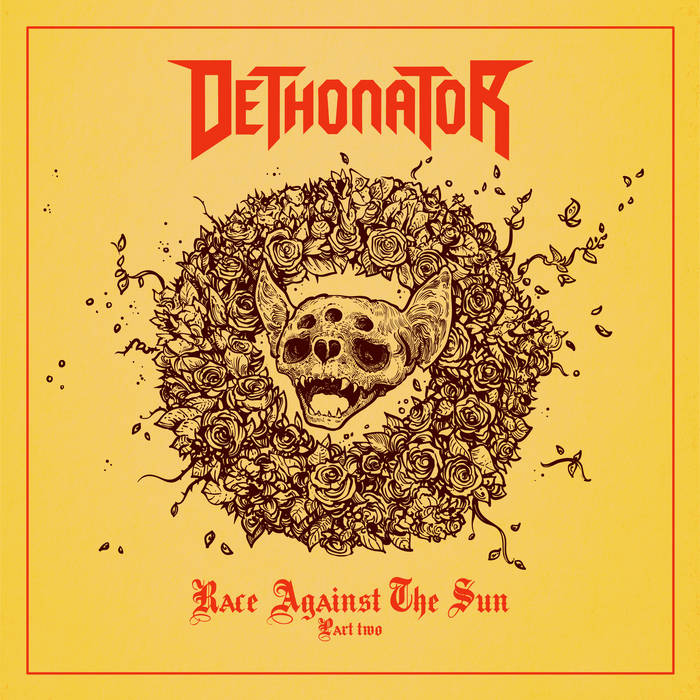 lovelymaidenliz One of the best albums I've picked up in ages. They aren't afraid to get creative in the songwriting and the album is something you can listen to over and over and find new bits to enjoy. Awesome. Favorite track: Beautiful In Death.

Paul Schwarz Not actually my fave cut per se, "A New Kind of Maniac" nonetheless encapsulates what makes the 'Nator's latest so special. Like "Fiddle About" on _Tommy_ this short segment reeks of nursery rhymes and childrens songs. Taking craft seriously without being overly pretentious is something English rock has a fine tradition in. Like one of their influences - Cradle of Filth - Dethonator are a 21st century force for keeping fine traditions alive. Favorite track: A New Kind Of Maniac.

In 2019, Dethonator released their most diverse and colourful album to date, ‘Race Against The Sun: Part One’. This acclaimed album features current live favourites ‘Nightmare City’, ‘Pyroclastic’ and ‘When Lucifer Fell’. Having earned a formidable reputation for their hi-octane, exhilarating live performances and their immediate, anthemic songs, Dethonator’s fan base has been steadily growing in the U.K. and Europe.


Now, in 2020, Dethonator are set to unveil their most ambitious project to date.

The upcoming album ‘Race Against The Sun: Part Two’ is to be released on 27th November 2020

Bassist Adz explains how the album came together:
“Bram Stoker’s Dracula was a story that loomed large for me in childhood. I always felt that one day Dethonator would do a song based on this story; after all, Dethonator are a story telling band. During the 2015 writing sessions for the Race Against The Sun albums, I received the sad news of Sir Christopher Lee’s passing. In the spirit of tribute, it seemed to be the right time to make a start on our Dracula song. From the beginning I felt strongly that it was going to be an epic; a narrative concept piece retelling the novel with music.
The writing sessions that followed were a surreal purple patch. I was writing daily, often from the early morning to past lunchtime. Sometimes I woke up having dreamed about riffs. Evenings were spent rereading the book. A weekend in Whitby was spent following in Bram’s footsteps. Evenings were spent absorbing cinematic adaptations of the story.
Recording for the albums that would become Race Against The Sun: Parts 1 and 2 took place in 2017. It soon became apparent that Part One was much closer to completion than Part Two, so the decision was taken to split the two sides of an intended double album into two individual releases. The Dracula concept song would have to stand on its own. To ensure the coherency and quality of the piece, I returned to the novel once more to write the vocal and lyrics in 2019. Many hours spent sitting in a chair with a note pad and a battered book full of underlinings and annotations.
It had always felt important that our musical retelling of Dracula should be as faithful to the original novel as possible. Almost all prominent adaptations and even some significant pieces of Dracula scholarship have built a labyrinth of changes, insertions and confusion around the story. Our version would give Bram Stoker his due respect. In accordance with this fidelity, the original words and tone of Stoker’s novel are well represented in the album’s lyrics.”


In a year when the metal community has faced unforeseen challenges, Dethonator have, by the grace of the Metal Gods, found themselves able to enjoy the privilege of having an album in the wings.


Dethonator conclude: “We hope that Race Against The Sun: Part Two should bring our “Race...” cycle to an end in fittingly ambitious fashion.”

All music written by Adam Lineker.

‘Race Against The Sun: Part Two’ was recorded by Tris Lineker, drums & bass at Aspect Studios and everything else at the band’s home studio. The album has been mixed and mastered by Chris Brookes. The cover artwork was created by www.all4band.com